Vanillin, and the question we dread 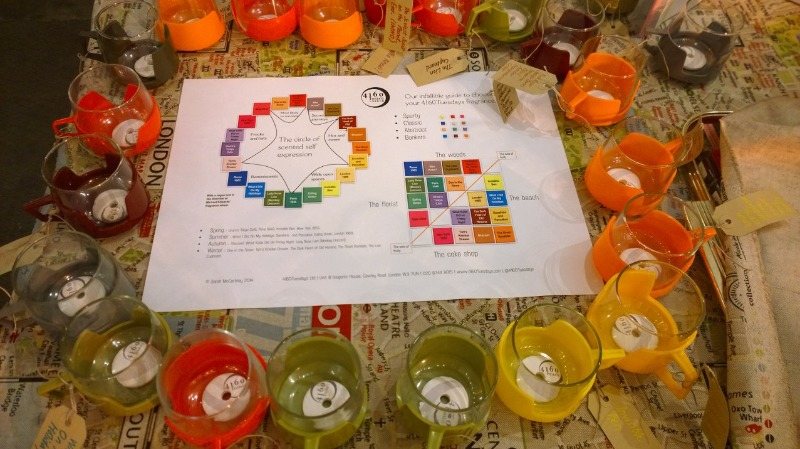 I’ve got a new way to display our scents. 1970s Pyrex picnic cups with ceramic perfumed discs at the bottom. On each cup I tied a brown paper luggage label and listed the notes, the scents that people might pick out and recognise when they sniffed the scents:

Last week we had three days at a wonderful pop up department store - chatting, sniffing, trying to pretend our legs didn’t hurt and preparing ourselves for the question:

“They’re all natural, aren’t they?”

For years, perfume sales people were briefed to answer this, “Oh yes, ours are all completely natural with no chemicals at all.” Perhaps they really don’t know, and they are repeating what they are told on their training notes. Perhaps the trainers don’t even know.

But this imaginary vision – that perfume must preserve the mystique of being made the way it was 200 years ago – is all starting to unravel as the EU impose restrictions on both natural and synthetic materials.

And there are places where perfumers are taking the lids off the secret boxes.

One is the Osmotheque in Versailles, the French perfume library dedicated to preserving the scents of the past. Go to one of their public lectures, and they will show you a history of the synthetic materials which changed perfumery, set fashions, and make up most of the fragrances we wear today.

Another is Thierry Wasser, my perfume hero, head perfumer at Guerlain who happily tells everyone about the ethyl vanillin in Shalimar and how Jean-Paul Guerlain created a synthetic narcissus for Vol de Nuit when the 1953 frost took out the entire Auvergne crop.

If Thierry Wasser’s going to start spilling the beans on how perfume is really made, then that’s good enough for me.

I try not to get cross at things like a cosmetics review I read recently, “They’re made with essential oils so they’re completely non toxic.”

This is so not true, but it’s tricky though.

Natural perfumery materials -  essential oils, CO2 extracts and absolutes - are formed of hundreds of different chemicals manufactured naturally by plants, and they are processed in ways that don’t change them too far from their natural state so we can use them in liquid and solid form.

Synthetics are made up of chemicals made in factories.

Toxic materials are banned, or restricted to safe levels. This includes the chemicals made by plants that end up in essential oils.

Besides, everything is poisonous if you use enough of it. Drink six litres of water and it can kill you. I’m old enough to remember the news story about Basil Brown, the Croydon man who turned yellow and died of Vitamin A and carrot juice addiction.

Given the choice, what I’d rather see on the horizon are trees and fields, not oil wells and chemical works, but if it weren’t for the factories, no one but the superrich could wear scent.

Napoleon wore natural violet perfume just to show he was loaded; once chemists started synthesising ionones  in the late 19th Century, everyone could afford the occasional bottle of scent. These days we can afford to wear perfume all day long all year around if we like. And that’s because synthetics and mass production have made them affordable.

In my studio I’ve got a tub - big enough to sit on - full of vanillin, and I’ve a little 100ml bottle of vanilla absolute. They cost about the same. From the early 20th Century, anyone who’s wanted to make an amber, oriental, floriental or fruitychouli has used vanillin. Guerlain, Chanel, Coty, Houbigant… you name it. Every perfume house bigger than a one man band, they use vanillin. They use vanilla too, when they can afford it. I like to use both together for a deeper scent with soul that doesn’t cost £1000 a bottle.

But we list “vanilla” on the notes. Why? Because it smells of what we know as vanilla. Natural vanilla from pods smells mostly of vanillin, the same chemical manufactured naturally by the plant. Biscuits, cakes, ice creams… most of them are made with vanillin, not natural vanilla. Partly because there’s not enough natural vanilla in the world to make all the ice cream we eat, and partly because most people can’t afford to pay £25 a scoop. 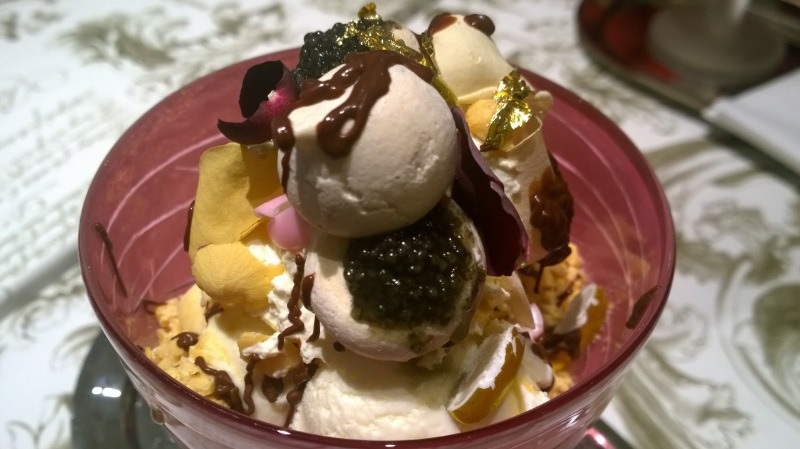 When I list “ice cream” as one of the notes in What I Did On My Holidays, that’s the vanillin. It’s a white soluble powder that smells just like Mr Whippy ice cream and the squidgy bit in the middle of Custard Creams. (Everyone outside the UK can put their own brand names in here and use their imaginations.)

Like all naturals grown in different places, natural vanillas can smell really different from each other. They’ll smell different from plant to plant, island to island, year to year.

Vanilla Bourbon, by the way, comes from the island of Reunion, which used to be named Bourbon, after the French royal family. Come the revolution it got a new moniker. It’s not called Bourbon because it’s so good it was named after royalty, as I’ve heard one well known perfume expert state out loud.

One more vanillin point. Perfumers are all told that vanillin will turn your final fragrance brown. I was assured by a chap who’d been to one of the best perfume schools that this always happens, without exception, and everyone knows.

This isn’t quite true. If you make really unusual perfumes and make accords from vanillin and other things that people have never tried it with – sometimes – it can stay colourless.

So my answer to the question “It’s all natural, isn’t it?” is this.

“No it’s not. None of the perfumes you’ll find in shops are 100% natural. But some perfume salespeople will look you in the eyes and lie their little heads off. Most perfumes are about 85 to 100% synthetic. Mine are about 50:50. Here, smell this one.”

So far, telling it the way it is hasn’t put anyone off.