Materials we use: violets 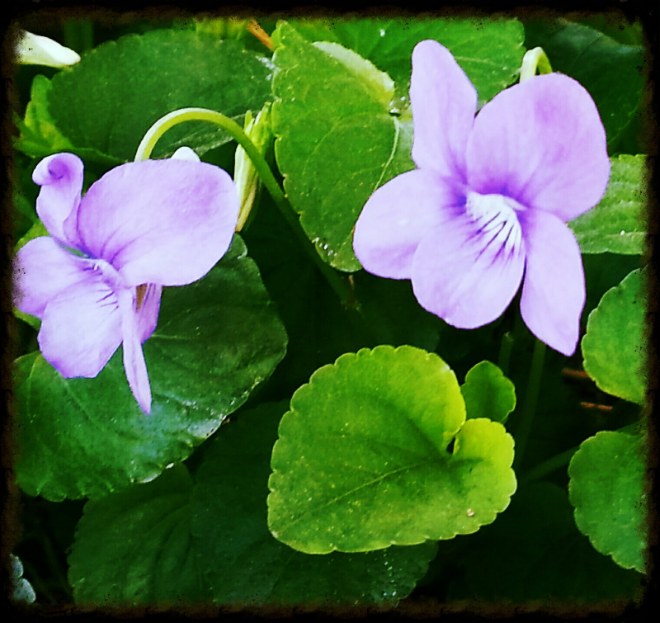 Have you ever smelled a violet? You have to get down really close. Or you can pick it, but that would be a shame. The picture here is of violets in my front garden last year. Any day they'll be back. I can't wait. There was a time when violets were cut and brought to London every morning by train for flower girls to sell by the bunch. Out of season the rich and fashionable would wear the perfume instead.

These days violet perfumes aren't made with violets. You might get a tiny amount of expensive violet leaf absolute in there, but even that doesn't smell of violets, it smells like very intense grass. Extreme leafiness.

In Victorian time and before, violet perfumes were made at huge cost, extracting the scent by a method that is no longer used - too expensive, too slow, tot small a yield. And it involved lard...

Napoleon Bonaparte loved his violet perfumes, but maybe that was because he was such an immense show off. Once he made himself emperor it turned his head; he installed himself in the palace of Versailles and spent money like water - completely forgetting why he'd joined in the French Revolution in the first place. But that's another issue. He liked his amazingly expenseive violet perfumes, and he liked everyone to know he could afford them so he splashed them about a bit.

He must have turned in his grave when Perkin, the British chemist working just up the road from here in Greenford, and others in France and Germany synthesised the ionones: alpha and beta. They smelled of violets; the world of perfumery changed overnight. (It took a bit longer than that, but not much.) Almost everyone could suddenly afford to smell of violets.

Parma Violets, the breath freshening sweets, are made with the ionones. Alpha is more floral and beta is more woody. Together they are amazing. It took until 1972 to find out that it really was the ionones that make violets smell that way, not a chemical coincidence. By that time they'd been making us smell lovely for 100 years.

Violet perfumes went out in the 70s and 80s - although the ionones were still in there, secretly adding their magic. They're back in favour now, but you'll probably find a tiny to medium amount of the ionones in almost every woman's scent on the market. Even if you can't detect the violet, they bring a delightful loveliness to a perfume. I can't describe it any better.

There's a fair amount of ionone alpha in Urura's Tokyo Cafe, and I've just put a load of ionone beta into my Vintage Tuesdays London 1969. Blended with citrus fruits and lavender, it's just amazing. Not violetty - just extra fruity and floral. It's one of the best ways I know to make natural materials smell ever more natural.