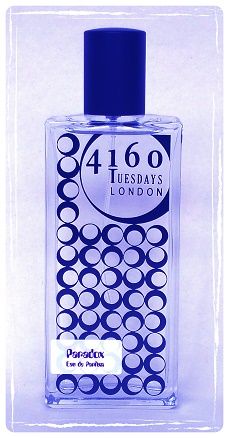 A couple of years ago this happened to Louise Woollam, writer of the Get Lippie blog and Jasmine Award nominee several times over.  (Click the link to read her story in The Guardian).

Essentially, a normal cold turned evil, took away her sense of smell and as it returned it came back with some really awful malfunctions. After a trip to the Osmotheque, the perfume museum at Versailles, Louise - who knew her vanilla from her vetivert - identified that she could still accurately smell ionones (in violet and iris), citrus fruits and musks. Other things were missing or smelled truly awful.

As you do, we volunteered to blend a perfume to Louise's individual needs, so she came over to Acton for the testing session. It had to smell good to her, but also good to others, particularly Louise's husband. She wasn't going to go out in something weird, just because her sense of smell had been turned inside out and upside down.

So Paradox exists, named because it's a perfume for someone whose sense of smell was being eratic to say the least. With Sarah, Louise created a deep green iris, with citrus fruits and musk and let us sell it here too.

We also use sales of Paradox to to raise money for Fifth Sense, the charity which helps people with smell and taste disorders.