Our perfumes are inspired by a place or a person at a certain moment, and created by our perfumer, Sarah McCartney (who isn't related to any of the other more famous McCartneys but she does get asked quite often). We handmade our scents in West London in batches of 50-200 bottles. 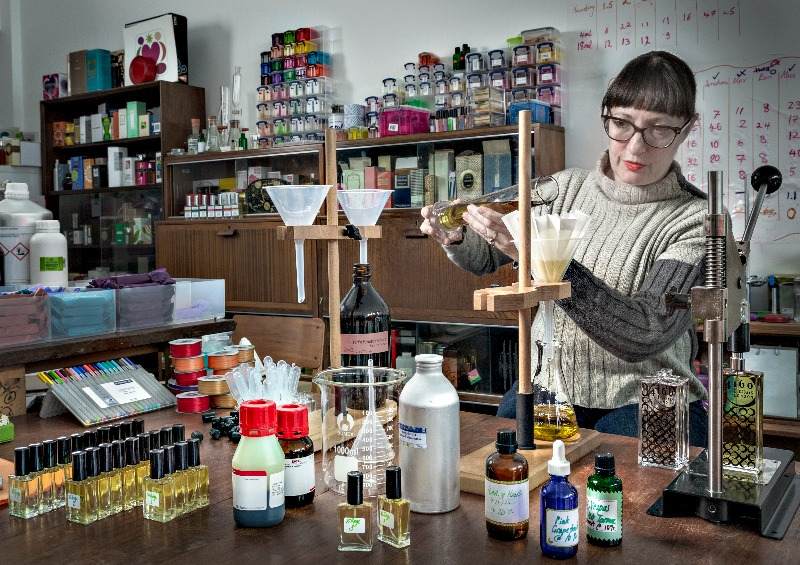 As a little girl, I did not make perfumes from rose petals. That was for softies. I made magic spells and wanted to be a witch when I grew up. When I was 16 I bought a bottle of Diorella.I studied maths and sciences, practised music and French, wrote books on brands and their evil twin - counterfeiting - and online marketing, and learned to dance Argentinean tango.

For 14 years I was the head writer for Lush while the company grew from four shops - one in Poole and three in London - to 700 worldwide. I was writing 50,000 words every three months for the Lush Times, aiming to encapsulate the products' scents in their descriptions. During that time, I bought and read 200 books on essential oils and herbalism and learned their aromas.

At the end of the 14 years, I took some time off to write a novel featuring a problem-solving perfumer. In it, I described the scents that she made and I wanted to have them available for people to smell. So I set off on a quest to see if I could buy them. This turned out to be impossible - and pretty expensive - because no one was making exactly what I wanted, so I started another quest to see of I could make them instead. Of course that turned out to be even more difficult, but once I'd started, I just kept going. 4160Tuesdays is the result."

"British perfumer Sarah McCartney makes scents that are thoughtful without being in the slightest bit pretentious (a rare thing in the perfume world) and sometimes even funny (even rarer)."

"I am fathoms deep in love. Sarah McCartney has not only brilliant eccentric talent, but you sense that she has the most enormous fun in creating her perfumes: she appears to get a hell of a kick out of her own products and this I find quite irresistible in an over-serious world. Sarah’s scents are full of joy and wit; laughter, memory, imagination and fantasy – all those things that we perfume-pickers constantly reference as fundamental foundations of a great fragrance. She composes like a bold Fauvist painter – using brilliant gemmy colours; great bold strokes camouflaging insightful subtlety. Sarah is eclectic, weaving all kinds of symbols, totems, allusions and glittering ephemera into a magical web: she is the Shena Mackay of fragrance, a mordant mistress of illusion. 4160 is a wardrobe of highly sophisticated scents which one can also play with – in the same way that Carl Faberge’s jewels are also the most fantastic toys ever made."

"I continue to be incredibly impressed by the output from London-based indie brand, 4160 Tuesdays. Perfumer Sarah McCartney has a natural knack for perfumery, but also the subversive talent of injecting humour and eccentricity into her compositions. The result is exceptionally well-crafted fragrances that have bold and bright characters, that one would really have to be a miserable git not to enjoy."

"...an incredibly gifted and entirely off-the-wall self-taught perfumer, Sarah McCartney (more of her anon), who single-handedly gives the finger to those who sniffily say you need a chemistry degree and several years hanging around the great and the fragrant good in Grasse, to become a ‘nose.’ "